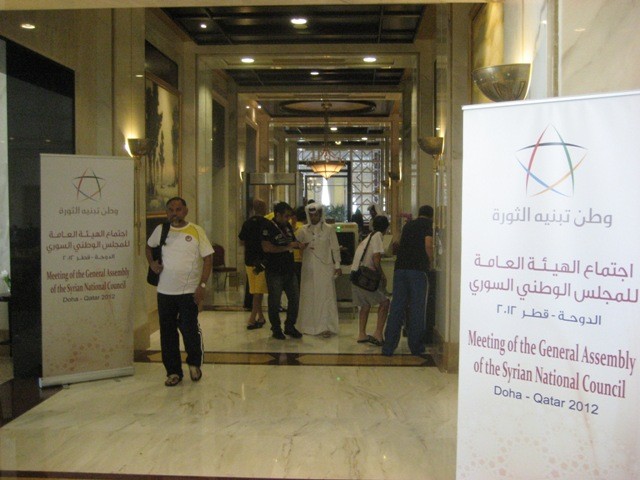 Revolutions are supposed to be about endings and beginnings.  But sometimes human nature gets in the way and derails the original purpose and desired outcomes of the majority.

Recently the fractured factions involved in the Syrian conflict, known as the opposition, met in Doha, Qatar.  We know that the conflict has killed thousands of people.  But the good thing is, the multiple factions of the opposition knew that as long as they remained fractured they were strengthening the current power structure.  For four days I witnessed the coming together of these opposition groups within Syria in a seemingly genuine attempt to create synergy.

As a speaker, having the opportunity to be an observer was awesome. [I was staying at the Ritz Carlton in Doha while on a speaking/consulting assignment with a Qatari enterprise.] One could say that I was lucky to be at the same place at the same time when these various Syrian factions were attempting to come together.

As a person with a “builders outlook”, I am constantly looking for the opportunities to “help” people and their organizations achieve their goals.  What you may not know is, people like me, who are called Experts who Speak are part of a movement that is very much needed in this world.

Based on the dialogue that I had heard, and that which was reported on AlJEZEERA (English) TV, it was clear to me that the factions were attempting to find common ground between them. Unfortunately they were focused on creating a “united opposition”.  A somewhat misguided strategy and a good example of flawed thinking. Every experienced speaker, especially those with international experience would say “what is this concept about a united opposition?” Trying to encourage people to join a “united opposition” movement just isn’t appealing. Most speakers that I know would work with these factions to create a compelling alternative.

Another example. Listening in on the dialogue, it became clear to me that the united opposition had a scarcity mentality. No wonder they were struggling with purpose and strategy. This group sure could use a huge dose of “abundance thinking.”  Arguing about how to divide a pie is certainly not as appealing as growing the pie.

1)      What is it going to take to ensure that the knowledge and expertise for transforming your organization is utilized effectively?

2)      How do you ensure that you are getting true expertise?

3)      How frequently is a Syrian-like situation of creating a “united opposition” happening, though on a on a much smaller scale, with people or groups of people in your organization?

The Global Speakers Summit, which I am chair, has defined Revolutions as: “A fundamental or complete change causing a person to think, feel or see things, events, and situations differently.  It is about endings and beginnings.”  One could say, a Revolution is about establishing and moving people forward toward a future filled with purpose and success.

Sid Ridgley can be reached at: sid@sidridgley.com

© Copyright 2012 Sid Ridgley. All Rights Reserved
Back To Top